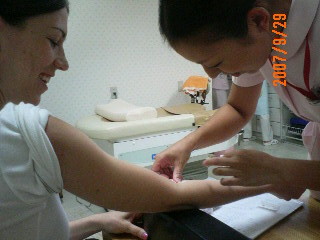 Inflammation markers, before birth, may be a good method of estimating if your child is at risk for autism

New research has isolated some easy blood tests that may be able to give us an estimation if your child might have autism. By measuring what we refer to as inflammation proteins we can derive a means of considering the potential of an autistic child being born.

To be clear this is not an absolute method and most of the proteins can be changed with both diet, supplements and medications. The best use of this information…. minimize the inflammation levels so that your potential child has the smallest chance of becoming an autism statistic.

The cost for the majority of these tests is fairly limited and typically covered by most insurance. If your pregnant or thinking of becoming pregnant a screening should include these tests. The other take away from the publication is that 3rd trimester infections could be a distinct factor in upping the autistic potentials. Stay well throughout the pregnancy, eat an anti-inflammatory diet, limits exposures to toxins and other nasties and keep the stress as low as possible.

by Karen Blum
Contributing Writer, MedPage Today
BALTIMORE — Neonatal inflammation could potentially be used as a biomarker for the risk of developing autism, researchers said here.
In a preliminary analysis of nearly 2,000 Swedish children born in the late 1990s, infants with higher inflammation as measured by nine acute phase proteins, including C-reactive protein, were more likely to develop autism than infants without high inflammation, reported Renee Gardner, PhD, of the Karolinska Institute in Stockholm, and colleagues.
Acute phase proteins (APPs) are made in the liver primarily in response to inflammation, particularly to interleukin-6, Gardner said during a presentation at the International Meeting for Autism Research. APPs are part of the innate immune system; fetuses can produce them by the second trimester of pregnancy.
Higher levels of some of the nine APPs were individually associated with developing autism (P<0.05); infants in the highest tertile of serum amyloid P, for example, had a 1.49 (95% CI 1.17, 1.90) times higher odds of developing autism compared with those in the lowest tertile.
“We think the immune system in early life may be a key determinant of later risk of autism, and what we can see is that the innate immune systems of these babies is being influenced by and is responding to the environment around them already at the time of birth,” Gardner said.
For the study, Gardner’s group retrieved dried blood spots collected from Swedish newborns on a card, as part of standard phenylketonuria testing, 4 days after infant birth. The samples were stored in a central repository.
The authors then took a 3-mm punch from the blood spots of 883 children born from 1998 to 2000 who went on to develop autism; from 1,116 children who did not develop autism; and from 234 unaffected siblings of the infants who developed autism.
A magnetic bead-based multiplex panel was used to measure nine APPs:
α-2 macroglobulin
C-reactive protein
Haptoglobin
Serum amyloid P
Procalcitonin
Ferritin
Tissue plasminogen activator (tPA),
Fibrinogen
Serum amyloid A

Across the board, levels of the APPs — what the researchers termed the APP risk score — were higher in the babies who developed autism compared with population-based controls, with odds ratios ranging from about 0.8 to 1.4.
They also were higher in the babies who developed autism compared to the unaffected siblings, with ORs ranging from about 0.8 to 2.5. Overall, the risk of developing autism increased with rising APP risk score; a one standard deviation increase in the APP risk score was associated with a 21% increase in the odds of developing autism (OR 1.21, 95% CI 1.10-1.33).
The study also found that male infants had higher levels of APPs than female infants.
In addition, factors including higher gestational age appeared to be associated with higher levels of APPs.
Also, neonates born to mothers who had infections during their third trimester of pregnancy had higher levels of fibrinogen, tPA, α-2 macroglobulin, and serum amyloid A compared with infants born to mothers who did not have such infections.
Infants with low Apgar scores had higher levels of APPs, a possible sign they may have had some birth stress or trauma, Gardner said. However, maternal body mass index had little association with infant inflammation.
Because APPs are not thought to cross the placenta, the results suggest that the perinatal innate immune system may influence later risk of autism, Gardner said.
Gardner told MedPage Today she had plans for follow-up studies in the population.
“We would like to know more about the hormonal environment, more about the nutritional environment” of the mothers, she said. Serum samples are available for some of the mothers so it’s possible to look at inflammatory or nutritional markers, she explained.
“We’re kind of at the tip of the iceberg here in terms of what we’re going to be able to do,” she said.