Twice the cost and worse results…..hmmmmm

Diabetics  should be doing better with our innovations and the millions spent on the change in lifestyles, along with the big push to address diets via limits on trans-fatty acids and all the press.

Unfortunately this is far from the desired result being seen.

As the cost of  medications goes up and the multitude of choices expand one would hope that the result would impact on the patients receiving a better health result. Unfortunately this is not the case as seen by this 20+ year evaluation study.

Continuing to increase the use of medications which are amazingly expensive is not an affordable approach for the medical system.

Did you know that there are now multiple additional classes of new medications to “treat” diabetes. Even with the use of these expensive medications the ultimate outcomes in terms of lifespans for these patients has not increased.

Check out this list of the many new medications, some costing upwards of #300/mo. 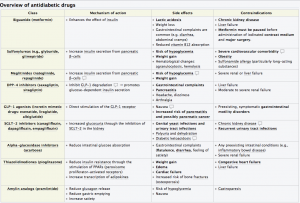 Within most of the 9 classes are a number of competitor products with different price points, frequency of use,  and I hope I’m impressing on you the complexity of this craziness. Keep in mind that the typical patient takes multiple drugs.

More than time for a change. If you’re going down this road of increased cost and more doctor visits…..call us and let’s get you on a better course of action. 541.773.3191

Cost of managing diabetes per person doubled over 2 decades

Managing diabetes has become more costly in the past 2 decades, primarily because of increased spending on drugs, according to research published in Diabetes Care.

Medical spending attributable to diabetes per person doubled between 1987 and 2011, based on an investigation by researchers from the CDC in Atlanta, Georgia.

“Despite the modest decline in the use of inpatient, ER and other medical services, the excess medical spending on those services that is attributable to diabetes continued to grow due to a substantial increase in the price of those services,” the researchers wrote.

Xiaohui Zhuo, PhD, of the agency’s Division of Diabetes Translation, National Center for Chronic Disease Prevention and Health Promotion, and colleagues compared per person medical costs and uses among adults aged ≥18 years with and without diabetes.

Inpatient care, ER visits, outpatient visits and prescription drugs were among the types of medical services included in the analysis. The investigators also considered changes in unit cost, as defined by expenditure per encounter for the services.

The largest proportion of the $2,790 increase was spent on prescription drugs (55%), followed by inpatient visits (24%), outpatient visits (15%) and ER visits and other medical spending (6%).

“Further studies are needed to assess the cost-effectiveness of increased spending on drugs,” the researchers wrote.

Disclosure: Zhuo reports being a federal employee at the time of the study.