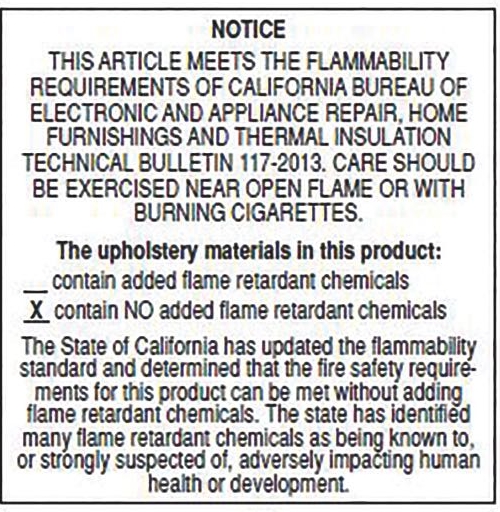 Prenatal exposure to fire retardants is poisoning your family

If you needed another reason to ditch the old foam products, such as your couch or chairs, which contain the most toxic fire retardants if they were made before 2004, it for your families health.

This telling study in Environmental Health Prospectives  should have you consider hitting the recycle bins asap.  The August 2014 publication notes the clear association with prenatal exposure to flame retardants and the result is impaired performance on neurodevelopment tests later in childhood.

This impairment translates to a lower IQ and more behavioral issues in our kids.

To complicate the matter further the levels of the fire retardants were higher in the children and persisted for years. Most disturbing is the fact that the products also put firefighters at a higher risk and did little or nothing to stop fires. This is another situation where money speaks louder than our health.

If you want to check your current furniture, turn it over and check the label. It should have an information telling you that the product either has or does not have fireproofing agents.

The new labels, such as the one we pictured, will be required starting in 1/2015. If your looking at one that simply states, “This article meets the flammability requirements of California Bureau of Home Furnishings Technical Bulletin 117” it’s probably toxic.

Interestingly there has been a massive change towards elimination of all the fireproofing agents. Combinations of wool and other fabrics when properly constructed are excellent at reducing fire risks and fully meet standards.

In January of 2015 the laws for how fabrics are tested for flame resistance changed to eliminate the open flame method and use a smoldering cigarette. Much more akin to what really happens in home fires.

Now for some good news. If you love your couch or don’t want to part with an heirloom, consider removing the foam products, OUTSIDE and placing them into a garbage bag. Recycle if possible and then vacuum and discard the vacuum bag.

Follow this by replacing the foam with a non-fire retardant containing product. Yes you must ask and be sure that you’re not getting a PBDE free but foam substituted with chlorinated Tris or other newer flame retardants, as they have been found to be equally as damaging.

If you’re in the market for a new product consider checking the list of big brand manufacturer at the Safer Chemicals Healthy Families site. It’s not an updated listing but a great starting point.

A number of large furniture manufactures are being arm twisted (shamed) into going the same route of fire chemical free products. Don’t forget your older electronic products are also a source of these harmful chemicals.

You might be asking yourself how do I get rid of the chemicals already in my body and affecting my health. Remember that this is but one family of the daily toxins we all get exposed to regularly. We should strive for the least exposures possible.

Children from the Midwest involved in a prospective study are the third U.S. birth cohort to show strikingly consistent associations between prenatal exposure to polybrominated diphenyl ether (PBDE) flame retardants and impaired performance on neurodevelopment tests later in childhood.1 As in the earlier studies involving birth cohorts from New York City2 and California,3 the children’s mothers had PBDE levels consistent with average U.S. adult exposure. The concordance of the three studies strongly supports the likelihood that PBDEs are developmental neurotoxicants, according to the authors of the new work.

PBDEs were widely used between the 1970s and 2004 in U.S. consumer goods including furniture, carpet padding, and electronic devices. The main PBDEs found in humans are from the now-banned penta and octa mixtures used in polyurethane foam padding and electronics enclosures, respectively.4 People can accumulate PBDEs in their bodies through food and inadvertent ingestion, inhalation, and dermal absorption of house dust.5,6

The new research involved participants in the Health Outcomes and Measures of the Environment (HOME) Study, a prospective birth cohort of women living around Cincinnati, Ohio, who were pregnant between 2003 and 2006. All 309 mothers provided blood samples at about 16 weeks’ gestation, and all had detectable levels of BDE-47, one of the most commonly detected PBDE congeners and the focus of the new study’s primary analysis. Their children underwent yearly developmental and/or behavioral assessments through age 5, plus IQ testing at the last followup.

After adjusting for potential confounders, including maternal IQ, the researchers found a statistically significant inverse relationship between mothers’ BDE-47 concentrations and their children’s IQ scores, says coauthor Aimin Chen, an epidemiologist at the University of Cincinnati College of Medicine. In repeated measurements of cognition, a 10-fold increase in maternal BDE-47 concentration was associated with a 4.5-point reduction in IQ score,1 consistent with decrements reported for the New York City2 and California3 cohorts. Exposure was also associated with a 3.3-point increase in hyperactivity score.1

“What’s really important is the consistency in the results across three very different populations, which is pretty amazing,” says Linda Birnbaum, director of the National Institute of Environmental Health Sciences. She observes that the new study’s use of maternal serum taken during the first part of the second trimester—earlier than in the other cohorts—suggests outcomes could be linked to earlier in utero exposures.

Small shifts in a population’s IQ matter, says coauthor Bruce Lanphear of Simon Frasier University in Vancouver, Canada. Lanphear, who is the senior principal investigator of the HOME Study, explains that a 5-point shift downward in the mean IQ of U.S. children would result in an additional 3.4 million children who are considered intellectually disabled or mentally retarded,7 with corresponding costs in treatment, special education, and lost lifetime earnings. “There isn’t a published estimate of the cost of PBDE toxicity,” he says, “but based on what we know about the impact and costs of lead toxicity, I would expect the cost of PBDEs to exceed $10 billion annually in the United States.”

The prospective cohort design with repeated follow-up visits is a major strength of the new study. Its weaknesses include the lack of PBDE measurements in the children’s serum, which other research shows can be higher than maternal levels.3,8 Julie Herbstman of Columbia University’s Mailman School of Public Health, lead author of the earlier New York City study,2 also points out that the half-life of BDE-47 in humans is thought to be on the order of years, so it’s hard to isolate the timing of exposure.

There is some evidence that PBDE levels are declining in the U.S. population.9 Even so, “pretty much everyone still has penta- and octa-containing products in their home,” says Herbstman. Typically, the types of products that contained these compounds—such as couches—are not replaced frequently.

Because PBDEs’ persistence allows them to remain in indoor environments for a long time, Chen recommends that prospective mothers and other concerned individuals wash their hands frequently, vacuum with HEPA filters, and use wet cloths to dust furniture. The nonprofit Environmental Working Group also recommends replacing any foam-containing item with a ripped cover or cushioning that is misshapen or breaking down.10