Our Hyperbaric Oxygen Therapy Center features a custom Fortius 420 model hyperbaric chamber. The chamber is ~ 8 feet in length and 42″ wide for comfort. We routinely dive a parent and a child as there is plenty of room to sit up and read. Take a look at the photo of an adult inside the tank to get an idea of the large size. 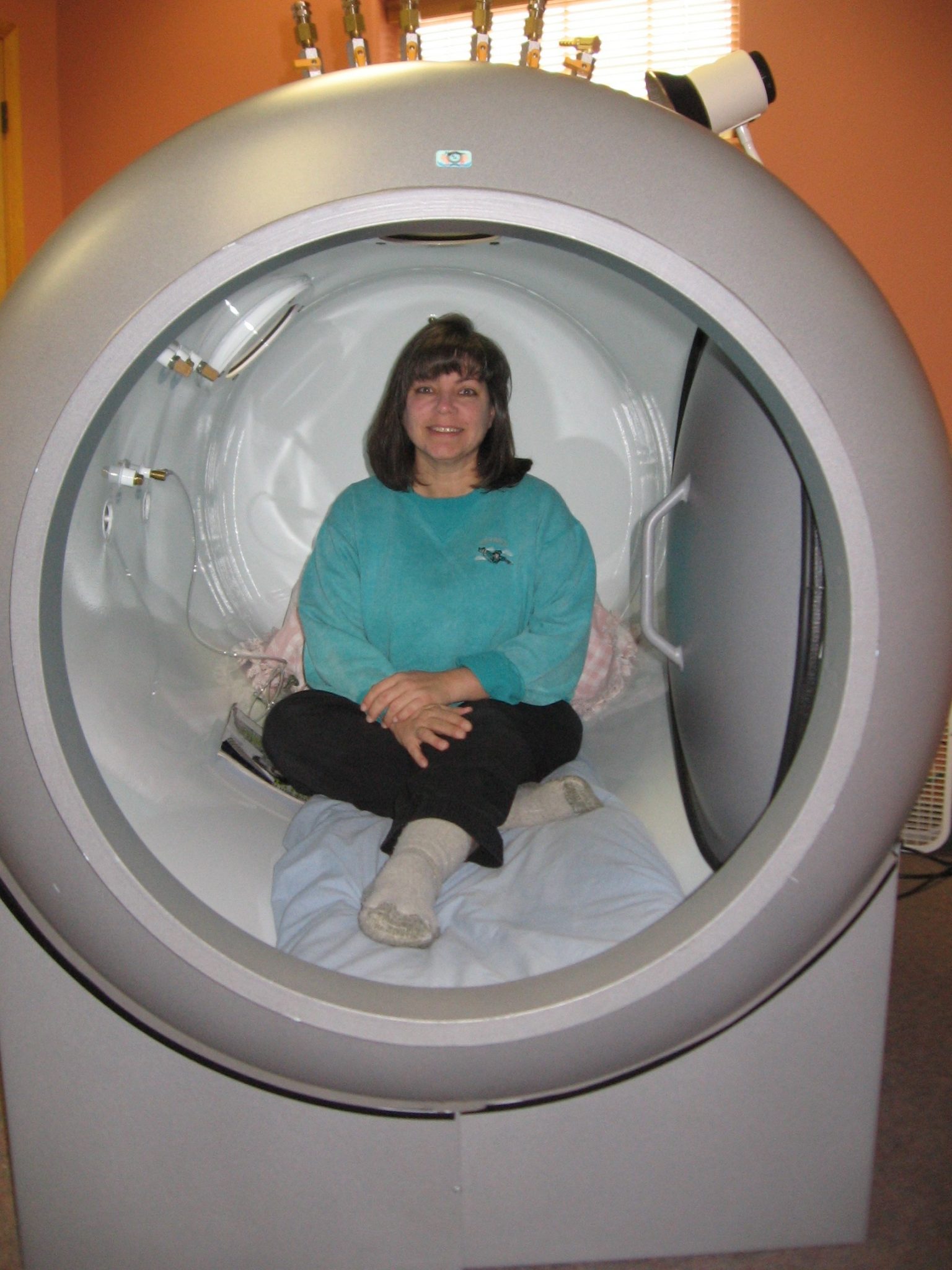 At pressures greater than normal, the body is able to incorporate more oxygen into blood cells, blood plasma, cerebrospinal fluid and other bodily fluids. The pressure difference allows the oxygen to penetrate even in areas not served by blood vessels. The increased oxygen absorption significantly enhances the body’s ability to aid in its own healing.

Once a person is in the increased atmospheric pressure the body responds by reducing inflammation. With the inflammation reduced the blood flow increases the delivery of oxygen to oxygen deprived areas. It’s at this point that the healing process is accelerated.

The body’s natural healing mechanisms can now function efficiently because the damaged tissues are receiving more oxygen. Even when the blood supply has been compromised, tissues can still receive the healing benefits of oxygen from other body fluids and plasma in the surrounding area.

How does HBOT affect the body?

Hyperbaric oxygen therapy is not new

In fact, the concept of Hyperbaric Medicine has been around since the 1800’s. Since then, hyperbaric oxygen therapy has been used around the world to successfully treat a wide variety of medical conditions.

In 1937 hyperbaric oxygen treatments were first used for decompression sickness but it was not until 1956 that interest in hyperbaric medicine really heated up. In Amsterdam that year, Dr. I Boerema reported that hyperbaric oxygen (HBO) was a therapeutic aid in cardiopulmonary surgery. Shortly after his colleague’s discovery, W.H. Brummelkamp, published a discovery of his own: anaerobic infections were inhibited by hyperbaric therapy.

International interest was rekindled when in 1962, reports of the enormous benefits of HBOT in the treatment of carbon monoxide poisoning were published. These discoveries and more, pushed hyperbaric medicine into the modern era.

Installations of hyperbaric units quickly began at some of the most revered and prestigious medical centers in the United States. A few of these early adopters were Harvard Children’s Hospital, New York Sinai Hospital, Duke University, and Good Samaritan Hospital in Los Angeles.

Fast Forward to the Era of Modern Hyperbarics

The advent of modern imaging technologies such as Magnetic Resonance Imaging (MRI) and Single Photon Emission Computed Tomography (SPECT) and Positron Emission Tomography (PET) , have provided researchers unprecedented insights into the actions and mechanisms of hyperbaric oxygenation and its effect on tissue. It’s no coincidence that the most significant, documented advancements in hyperbaric medicine have emerged recently in large part due to pre- and post- hyperbaric therapy evaluation using these high-tech tools.

As hyperbaric research continues, scientists are finding that neurological conditions, stroke and brain injuries, all previously considered to have poor prognoses, respond well to HBOT.

Successful treatment with hyperbaric for conditions as diverse as autism, fibromyalgia, multiple sclerosis, side-effects of chemotherapy and radiation toxicity in cancer patients have growing numbers of researchers, physicians, patients and their families believing in the power and efficacy of HBOT.

Our well trained, qualified staff is here to assist you in making sure that your experience is enjoyable and meets your medical needs.

We are pleased to be one of the select HBOT centers, offering a professional certified large comfortable dive facility in Oregon and being able to perform off-label treatments.

If your condition appears on this list please do not hesitate to contact us and ask how HBOT may be the right treatment for you!

This list was created by correlating the known research and findings that were helpful with these disorders. Please note this is not the complete list of all the disorders that HBOT can help. These are the disease we treat at the Center.

To learn more about HBOT or off-label treatments please call us today and schedule your appointment !     541.773.3191