Insecticides and Autism the connection, again 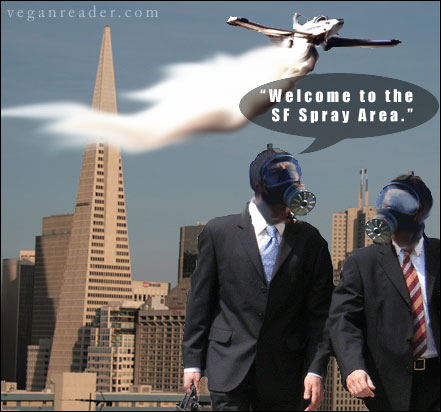 Killing mosquitos, via airplane, can severely affect your child’s health

In a study done by Penn State College of Medicine there was a clear association between aerial spraying of insecticide and a 25 % higher autism rate.  This was compared to the use of insecticide pellets in other areas, in the same state.

If you want to find out if your being sprayed , in New York you can go see the spraying schedule. If your in another state, a google search and some digging may give you the information.

Clearly we are starting to see an epidemic with the zika virus, and one male American has died from complication of this infection. This was an unusual situation is is not at all common. So no longer is this exclusively an issue with pregnancy.

The most common symptoms found in Puerto Rico are rashes, muscle aches, headache and fever. In other area’s of the outbreaks, up to 80 percent of those who tested positive had no symptoms. In the next week (5/14/16) a new rapid test is becoming available so you really will have a way to know if you have been infected.

A number of firms are working on both vaccines and treatments for this disorder. When large scale worldwide infections are looming there is a real effort on the part of the pharmaceutical and universities to find solutions. I’ll keep our readers informed.

The use of non-toxic insect repellants, good hygiene around your home which means elimination of standing water, intact screens on your windows and doors coupled with proper clothing when your out, especially if your camping or in forested/swampy areas is a must. Some studies have suggested that the use of B vitamins and elimination of cologne and perfumes can reduce your attraction from mosquitos.

This summer, the Aedes aegypti mosquito will begin its proliferation throughout much of the southern and eastern United States, and fears about the Zika virus, which the insects can carry and transmit, will no doubt reach a fever pitch. But a major outbreak of Zika is unlikely in the continental U.S. (though “local outbreaks” affecting a few dozen people are projected to occur), just as the country doesn’t see widespread outbreaks of dengue, also carried by Aedes aegypti, outside of a few individual cases. That’s due, in part, to a sturdy and aggressive program of mosquito control in the country. But as all eyes turn to mosquito prevention, new research released Saturday finds a connection between one common method of mosquito control—spraying insecticide from planes—and heightened incidence of autism in children born where it occurs.

Outside of a posting on a government website, or perhaps notifications by mail, you might not know it, but in many places in the U.S. (including nearly every ZIP code in New York City) larvicides are sprayed from planes on neighborhoods to combat mosquitoes. When Steve Hicks, a physician and assistant professor of pediatrics at Penn State College of Medicine, looked at rates of autism diagnoses in eight ZIP codes where aerial spraying of pyrethroids, a common class of insecticides, happens in the summer months, and compared them with those in 16 surrounding ZIP codes where mosquito control is done primarily through pellets distributed on the ground, he and his team found a 25 percent higher rate of autism among the plane-sprayed group.

Of the 19,000 kids living in the eight ZIP codes sprayed by planes, there were 159 cases of autism (0.84 percent). In the 16 control ZIP codes, 298 out of 44,000 children (0.67 percent) were diagnosed with autism. Overall, both rates are lower than the national average for autism, but Hicks says that could be due to the fact that his team relied on data from children who came through SUNY Upstate University Hospital, a regional medical center, potentially leaving out children who were diagnosed by their family doctors and never went to the regional center.

The research stemmed from an earlier major study known as the CHARGE Study (Childhood Autism Risks From Genetics and the Environment), which found that if pregnant mothers in their third trimester were exposed to pyrethroids and two other common pesticides their children were much more likely to be diagnosed with autism.

The ZIP codes in the latest study are all northeast of the city of Syracuse, New York, near an area called Cicero Swamp, where, as the name suggests, mosquitoes carrying viruses like West Nile or eastern equine encephalitis could easily proliferate.

“I want to be careful not to cause a scare that we should be abandoning these pesticide spraying practices,” Hicks says. “We know that autism has a genetic component. It’s not something that’s caused solely by environmental risk factors,” he explains. But twin studies “estimate that 50 percent of autism is genetic, and about 50 percent is things we’re exposed to in our environment. In a child who is genetically predisposed, there might be one environmental trigger that could push them over the edge into a diagnosis.”

Hicks speculates that the aerial spraying of pyrethroids is not as localized or precise as other mosquito control methods. “If you think about the physical act of spreading pellets on the ground, you’re doing it in a controlled manner. You know exactly where they’re landing. From a plane, they have to travel hundreds of meters to the ground” and could be subject to drift in the air.

The local department of health in the Syracuse area issues advisories about the spraying, but Hicks is concerned about how residents respond to those warnings, or if they even see them at all. “No one that I know of has ever surveyed people in the area to ask if they cover their garden, or their child’s play set, or if they do stay indoors” while spraying is underway, he says.

But Hicks adds that further research is needed to know whether the increased rate of autism is due to the spraying itself or due to a presumably higher exposure to mosquito-borne illnesses. After all, experts are already warning that Zika may cause an increased risk for mental health problems.

“I wouldn’t be surprised if we saw a big upswing in ADHD, autism, epilepsy and schizophrenia,” Ian Lipkin, the director of the Center for Infection and Immunity at Columbia University, told The New York Times in February. That gives Hicks pause when looking at his findings. “We need to go and look if these children with autism have antibodies to these viruses in their blood,” which would indicate a latent exposure, he says.