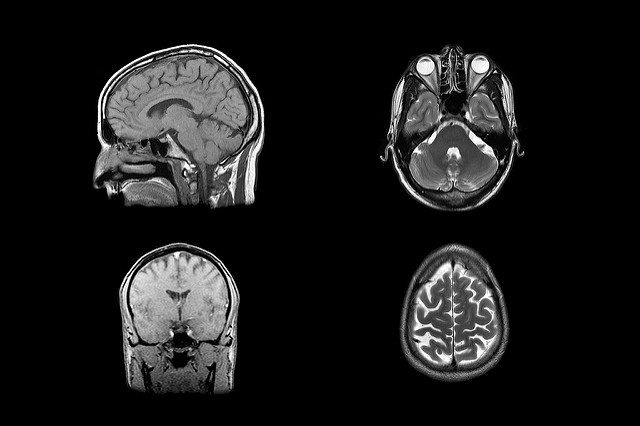 When you think of your head and brain consider it akin to the consistency of well…. hard jello in a hard shell. Now consider what happens when you hit your head and the jello in the bowl, your skull, gets to moving in a closed space. Not a pretty sight…… as it can swell, break blood vessels, cause actual damage to the brain tissue and a host of other problems.

This the study conducted at the Boston School of Medicine connects the dots between the concussions received and the changes associated with the disease, Alzheimer’s. They used MRI scans to evaluate a number of areas of the brain for soldiers who had experienced concussions and compared them to those without a concussion. What they found was that there were 7 areas of the brain that thinned out. Basically lost brain matter.  If you have seen the movie, “Concussion” you can get an idea of the gravity of the situation, with football players.

You should know that the concussions they evaluated were rated as moderate to severe ….. and not just someone had a mild impact.  Does that mean your in the clear with a small hit to the head……no. Unfortunately, all impacts make a difference and affect your brain.

What to do….don’t play head injury sports. Yes…football to soccer ……I know it’s a big deal but….you only have one head. If you’re working where you might experience head trauma….wear a helmet. There is a whole new area of technology for helmets that actually work to reduce the impact to your head.  If you’ve experienced a number of hits to the head you might consider taking a number of anti-oxidants and some of the supplements in the choline family.

I know it’s a big deal but….you only have one head. If you’re working where you might experience head trauma….wear a helmet. There is a whole new area of technology for helmets that actually work to reduce the impact to your head.  If you’ve experienced a number of hits to the head you might consider taking a number of anti-oxidants and some of the supplements in the choline family.

When you experience a concussion, the brain responds with a set of responses that are labeled inflammation. It’s the brain’s way to try to isolate and ultimately get rid of damaged tissues. Unfortunately, it can not only be a positive but also negative, as it may become an ongoing process instead of a limited set of chemical changes that fix the tissue. It can and often changes your way to interact with your brain’s communication center. If you know someone who is suffering from PTSD, you probably see them having a mishmash of an internal conversation.

You can evaluate changes in your brain with a simple evaluation that’s similar to playing a computer game. We have consistently found that the simple 45-minute test can give us loads of insight, way before any obvious signs of damage. Ready to know what’s going on upstairs ?

If you’ve had some head trauma or just want to get an evaluation of where is your brain function ?

Caption: Researchers have discovered the link between concussions and the acceleration of Alzheimer’s disease.

A direct link has been found between concussions and Alzheimer’s disease.

New research by the Boston University School of Medicine (BUSM) found that concussions will accelerate brain atrophy and cognitive decline in people who are already at a genetic risk for the disease.

The researchers studied 160 Iraq and Afghanistan war veterans, some of which had suffered one or more concussions and some who were concussion-free. By using MRI imaging they measured the thickness of the cerebral cortex in seven regions that are the first to show atrophy in Alzheimer’s sufferers, as well as seven control regions.

Jasmeet Hayes, Ph.D., assistant professor of psychiatry at BUSM and research psychologist at the National Center for PTSD, VA Boston Healthcare System, explained the results of the study.

“We found that having a concussion was associated with lower cortical thickness in brain regions that are the first to be affected in Alzheimer’s disease,” Hayes said in a statement. “Our results suggest that when combined with genetic factors, concussions may be associated with accelerated cortical thickness and memory decline in Alzheimer’s disease relevant areas.”

One of the most noteworthy results of the study is brain abnormalities were found in a younger group than what was expected, with the average age being 32 years old.

“These findings show promise for detecting the influence of concussion on neurodegeneration early in one’s lifetime, thus it is important to document the occurrence and subsequent symptoms of a concussion, even if the person reports only having their ‘bell rung’ and is able to shake it off fairly quickly, given that when combined with factors such as genetics, the concussion may produce negative long-term health consequences,” Hayes said.

With these results, the researchers will work to find the precise concussion-related mechanism that accelerate the onset of Alzheimer’s disease, chronic traumatic encephalopathy, Parkinson’s and other neurodegenerative diseases.

According to Hayes, treatments may one day be developed to target those mechanisms and delay the onset of neurodegenerative pathology.