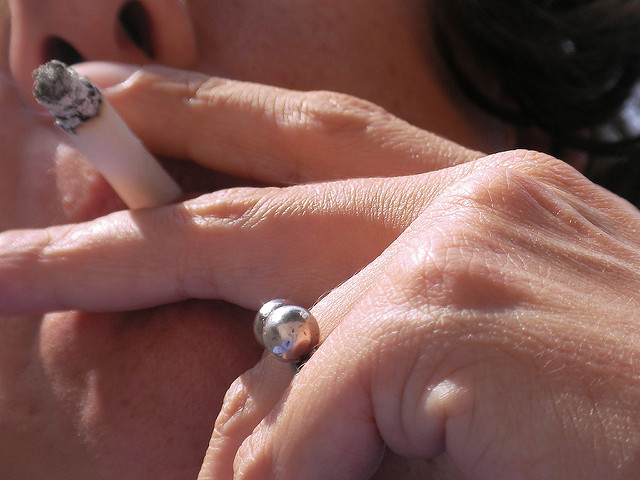 If the obvious noxious smells and health destroying cancer of the lungs and other organs was not enough, now a publication from the University of California has documented the correlation of cigarette smoke, also known as third hand smoke the residual that sticks to all surfaces, increasing your diabetes risk.

The researchers found that those in contact with the substances of cigarette smoke developed what is known as insulin resistance. This means that your insulin fails to have the same effect, resulting in higher blood sugars causing oxidation and inflammation, which can lead ultimately to diabetes.

I want you to extend your thought to a youngster who is crawling on a carpet where folks have been smoking….talk about getting dosed.  If your a senior you’re also at more risk.  It makes no sense to purchase a smokers car or their home.

There is no way to really “clean” out all of the chemical residue. Now you really have a reason to re-consider a smokers previously owned products, period. I assume you could use a degreaser to remove the chemicals on an single object but does that make sense ? Probably not….and homes and cars can’t be fully decontaminated.

Next time you’re with your family consider avoiding any contact with third hand smoke affected products. If you smell smoke or see the telltale discoloration, avoid contact and find an alternative.

Looking for optimal health and health care services that give you all the information you need ? Call us at 541.773.3191

Thirdhand smoke (THS) results when exhaled smoke gets on surfaces – clothing, hair, homes and cars. THS has been shown, in mice, to damage the liver and lungs, complicate wound-healing and cause hyperactivity. Add to this list now Type 2 diabetes, the most common form of the disease.

Research published today (March 2) in PLOS ONE by a team led by scientists at UC Riverside shows that THS exposure causes insulin resistance, a precursor to Type 2 diabetes, in mice.

“If confirmed in humans, our study could greatly impact how people view exposure to environmental tobacco toxins,” said Manuela Martins-Green, a professor of cell biology and neuroscience at UC Riverside and the lead author of the study. “Children and the elderly are especially vulnerable to THS and its impact on health. Because infants frequently crawl on carpets and touch objects exposed to exhaled smoke, they are at high risk for THS exposure.  The elderly are at high risk simply because older organs are more susceptible to disease.”

Martins-Green explained that THS consists of tobacco smoke toxins that linger on surfaces and in dust after tobacco has been smoked.

“This includes toxins that become increasingly toxic with age and are re-emitted into the air or react with other chemicals in the environment to produce new pollutants,” she said. “Some of these pollutants are carcinogenic.”

Her research team found that cellular oxidative stress (arising because of reactive oxygen species) increases in mice exposed to THS, damaging proteins, fats and DNA, and leading to hyperglycemia (excess glucose in the blood stream) and insulinemia (excess insulin in the blood) – a condition also called insulin resistance. When the THS-exposed mice in her lab were treated with antioxidants, the oxidative stress, the molecular damage and the insulin resistance reversed, confirming that THS exposure increased oxidative stress.

“Dr. Martins-Green has a unique animal model for human exposure to THS, especially in small children. This mechanistic study gives us more evidence about the connection between exposure to THS and human health,” said Anwer Mujeeb, a biomedical and environmental sciences program officer at the Tobacco-Related Disease Research Program (TRDRP), which funded the study.

“In Type 2 diabetes, glucose does not enter the cells and increased levels of insulin, resulting from an overburdened pancreas, do nothing to facilitate glucose entry into cells for producing energy,” Martins-Green said. “This is what we saw in 49 percent of the mice we exposed to THS in the lab.”

In the United States, nearly 88 million nonsmokers, ages three and older, live in homes where they are exposed to THS as well as secondhand smoke (smoke exhaled by a smoker). As a result of this exposure children have significant blood levels of carcinogens that result when nicotine deposited on the surfaces reacts with nitrous oxide in the environment. THS remains in houses, apartments and hotel rooms even after smokers move out.

“To rid the house of THS, you have to strip the home of everything – furniture, appliances, paint, clothes, ducts, ventilation – that could have THS,” Martins-Green said. “It would be more effective to simply move. Yes, there are cleaners we can use, but that would mean exposure to other strong chemicals.”

Little is known about the specific health implications of human exposure to THS. The current study, and studies like it that use animal models, could contribute to determining human health risks and developing policies leading to a reduction in both exposure to THS and disease.

To do their experiments, Martins-Green and her team first exposed cages (used for housing the mice) to secondhand smoke using a smoking machine. This smoke landed and accumulated on materials (commonly found in homes) in the cages, and turned into THS. Mice were then introduced into the cages.  A control group of mice was not exposed to any THS. The THS-exposed mice were either fed a standard chow diet or a “Western diet” – a modified chow diet similar to a high-fat diet people eat.

“Our findings have direct implications for humans because tobacco toxins are often present in human habitats,” Martins-Green said. “We hope our study will influence public policy towards controlling the exposure of nonsmokers – especially infants, children and the elderly – to THS toxins.”

Caused by a combination of lifestyle and genetic factors, Type 2 diabetes is typically a chronic disease. Symptoms include frequent urination, increased thirst and hunger, and weight loss.  Long-term complications (due to high blood sugar) include heart disease, stroke, eyesight problems, and kidney failure. More common in adults, Type 2 diabetes is increasingly affecting children as childhood obesity increases. There is no cure; people with the disease manage the condition by eating well, exercising and maintaining a healthy weight.

TRDRP played no role in the study design, data collection and analysis, or in the preparation of the research paper.

“The TRDRP-funded statewide consortium on THS research is a distinctive effort focusing on unraveling this potential public health issue. It is rewarding to see that research by Dr. Martins-Green is contributing to the body of scientific evidence that may support tobacco-control policies in California,” said Bart Aoki, the director of TRDRP.

Martins-Green was joined in the study by graduate students Neema Adhami (first author of the research paper) and Cristina Flores at UC Riverside; and Dr. Shelley R. Starck at UC San Francisco.

Next, her team plans to identify THS-induced biomarkers that correlate with liver damage.

“If a person’s urine or blood has THS chemicals and biomarkers of liver damage, one can imagine identifying a number of these markers that can be arranged on, say, a strip or a chip which could be used in the physician’s office to indicate liver damage allowing for early diagnosis and potential treatment,” Martins-Green said.