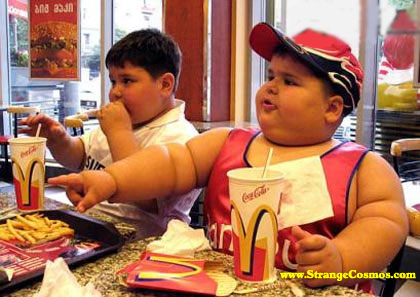 Being overweight is not ok and being obese is clearly a medical issue of significance. Can you even imagine 268 million kids being overweight ?  And if you’re wondering 92 million are in the obese category. This is staggering from the perspective of next generations ability to literally function.

Multiply the issues of obesity and excess weight with the changes in our work environment and it’s a guaranteed set up for social and medical costs we can’t afford. How many of you spend a ton of time at a desk. Yes, a standing desk is better but…. let’s get real how many of you are using one ? Do you realize that the average overweight kid will have a harder time socially and their development is very different due to the hormone balances and fat ?  They will tend to have multiple changes in their energy, engagement with school activities, joint development and a host of other potential calamities.

Long-term consequences lead to a host of common and killer diseases such as heart disease, cancers, and diabeties to name the top three.

What to do ? You have the power to influence your kids. With that said what do you eat ? Are you drinking soda and other non-nutritive drinks that encourage weight gain or is water your principle beverage ? How much of your food supply is processed food ? Simple carbs including breads, baked goods, candies, cookies and cakes ? Get the picture ? What about movement ? Do you actively move about be that a formal or informal means of exercise, daily ? Yes, you read that correctly. It’s a habit regardless of if your walking or biking to work or making a habit of hitting the gym or perhaps an online workout…

Want to get a good idea of your son’s/daughter’s movement during the day. Load a pedometer app on their phone and check to see how much movement takes place regularly and most are free.

The Global outlook study states the obvious and sounds a dire warning. Some take aways from my clinical practice of 30+ years, is that starting early in addressing overweight issues is essential. Bad habits are formed and can be undone and reformed, regardless of your current state.

Working together with your kids can have multiple secondary benefits. You get to hear what’s going on, spend quality time enjoying the activity and can involve them in learning to make great choices that impact the whole family.

This is only the start of the transition to better health. Want to lose weight and get a handle on your kid’s health ?

Globally 268 Million School Children Will Be Overweight by 2025

The data has been published to mark this year’s World Obesity Day on Oct. 11.

New figures published by the World Obesity Federation in Pediatric Obesity for World Obesity Day 2016 suggest that if current trends continue, by 2025 some 268 million school-aged children (age 5.0 to 17.9 years) worldwide will suffer excess bodyweight including 91 million who will have obesity. This is an increase from 223 million in 2013, and is in addition to the estimated 41 million children under age 5 years who are currently affected by overweight or obesity.

The data has been published to mark this year’s World Obesity Day which takes place on the Oct. 11. This year the focus is on ‘ending childhood obesity’ with an emphasis on the need for urgent government action and leadership to tackle this unsustainable health concern.

In addition to rising levels of overweight and obesity, the analysis also suggests large numbers of children globally will be affected by obesity-related diseases by 2025. This includes up to 28 million with hypertension, 39 million with fatty liver disease, 15 million with impaired glucose tolerance and as many as 4 million with Type 2 diabetes, a disease which usually affects older age groups. (Note some children will have more than one condition.)

Perhaps of most concern is the fact that 80% of child overweight and obesity is expected to occur in low- and middle- income countries, where health systems will face rapid increases in demand for treating chronic diseases, and economic productivity will be reduced.

The President of the World Obesity Federation, Professor Ian Caterson from the Boden Institute at the University of Sydney, said “The obesity epidemic has reached virtually every country in the world, and overweight and obesity levels are continuing to rise in most places. It is of particular concern that it is the low- and middle- income countries who have the least resources to treat obesity are likely to have the greatest burden. Governments know the present childhood obesity epidemic is unsustainable and doing nothing is not an option.  That’s why we are using World Obesity Day to call for urgent action.”

In 2012 governments all around the world made a commitment to reduce the prevalence of young child and adolescent obesity to 2010 levels by the year 2025. In 2016 the governments of the World Health Assembly considered the report of the WHO Commission on Ending Childhood Obesity and resolved to develop national responses to implement the Commission’s recommendations. The World Obesity Federation are using World Obesity Day to remind governments of their commitment and to call for them to take urgent action.

As part of World Obesity Day, World Obesity Federation is also urging health ministries to introduce and expand screening, weight-loss, weight-management and treatment services to meet the needs of all children who are already overweight or obese. There is a need to improve the delivery of weight management and treatment services to ensure access for every person who needs them, children and adults alike. Medical services will need funding, staff will need training, and proper care pathways must be developed to ensure everyone has access to the care they need.