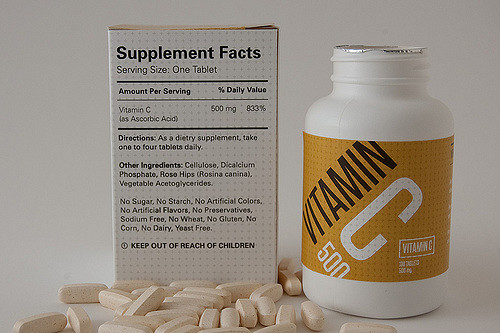 Vitamin Deficiency is rare but present in the US

In the US we take it for granted that even those on the lower end of the socioeconomic scale have the basics. Well it’s not true and a recent study had documented that indeed there are those individuals who don’t even get the minimum vitamins needed to function.

You might recall reading about the English sailers who needed to take lemons and other products on board with their long trips to the New World to avoid scurvy.

Well there are individuals living in the poorest neighborhoods and those eating a restricted or peculiar diet who also suffer from vitamin C deficiency., It’s estimated at 10-17% of low income people fall into this category.

This brings up another question, what’s the correct amount ? The recommended daily allowance level (RDA) is set at 60 mg per day for healthy people, older than 4 years of age.

On the other end of the spectrum are those proposing that much higher in the many thousands of mg per day is needed to meet one’s real need and achieve optimal levels. Linus Pauling and his ground breaking work clearly suggested that higher doses are appropriate and literature since his findings seem to support the same.

The ongoing findings well done work at the Linus Pauling institute, at Oregon State University, has continued to show the absolute essential need for larger qualities of vitamin C in many individuals.

If your causing the internet you will note that there are a number of terms used to describe the governments ideas of vitamin and mineral intake. For a good overall discussion see the wikipage.

Because vitamin C is a water soluble vitamin it goes through your system in a number of hours and therefore needs to be dosed fairly regularly to achieve higher levels in the body.

One way to determine the upper limit can be found by using progressively higher doses throughout the day and seeing at what point you develop loose bowels. There is a very limited potential of toxicity with vitamin C. We look for an upset stomach, cramps or diarrhea. Again this occurs typically when you take very large doses and the symptoms will pass without treatment.

Optimal doses will vary, dependent on your health. The FDA suggests that a mere 50 mg is adequate. Most of the current research suggests much higher levels.  As an example you may find that 500mg three times a day is perfect for regular daily intake, but you might want to increase the dose significantly if your exposed to a virus , etc..

Vitamin C comes in a number of forms, with differences in prices and formats. From powders to pills, from capsules to effervescent flavored packets. For youngsters we find that the powdered form buffered with minerals is easy to add to food and fluids. If you have a sensitive stomach consider a buffered form of the ascorbic acid (vitamin C) or make a point of taking the vitamin C with food.

You will also find an extensive write up of using vitamin C in an intravenous solution (IV).  From a scientific point of view the levels of vitamin C in the blood following an IV can not be matched with any oral preparation. My personal experience with the IV vitamin C is that it can make differences in ones immune function literally in minutes to hours.

The easiest way to not experience a vitamin C deficiency is to eat a great diet and include a variety of fresh vegetables and fruits. This list will give you an idea of the amount of vitamin C in foods. Remember think of veggies first and then the whole fruit to keep the sugar levels at their lowest.

From the NIH National Institute of Health

Shiver me timbers, landlubbers with scurvy

A recent report highlights the fact that some nutritionally deficient populations still get the old, preventable disease.

Aye, matey, scurvy’s back. The disease caused by severe vitamin C deficiency that plagued pirates in the 1600s still sucks the health from some populations in modern times—namely the poor, the homeless, college students and people living in neighborhoods in which fresh, nutritious food is as hard to come by as a talking parrot.

A recent report in the journal Neurology: Clinical Practice notes the recent presentation of such cases to neurologists in San Francisco. Neurological symptoms of scurvy include bleeding, severe joint pain, small blue and red spots on the skin and swollen gums. The symptoms don’t appear until several months of severe vitamin C deficiency have occurred.

Two of the subjects in the Neurology report were residents of low-income housing projects. According to a Centers for Disease Control and Prevention study published in 2009, 10 to 17 percent of low-income people suffer from scurvy-level vitamin C deficiency.

While the reports don’t indicate a burgeoning scurvy epidemic, “where and how this old disease is turning up says a lot about nutrition in America today,” writes Leah Samuel on STATnews.com.

“We feel like we’re practicing in a developing country,” Sarah Kawasaki, director of internal medicine at Health Care for the Homeless in Baltimore, told the website. “That they aren’t getting vitamins in their diet is unconscionable, but in our work it can be a reality.”

She said scurvy is often mistaken for other illnesses and can go misdiagnosed for months. “It’s so rare to hear about vitamin deficiency in this country,” she said. “It’s not on our radar.”

New research continues to suggest new beneficial uses of vitamin C. One study, published in the American Journal of Clinical Nutrition, found that high levels of the vitamin may fight stomach cancer.